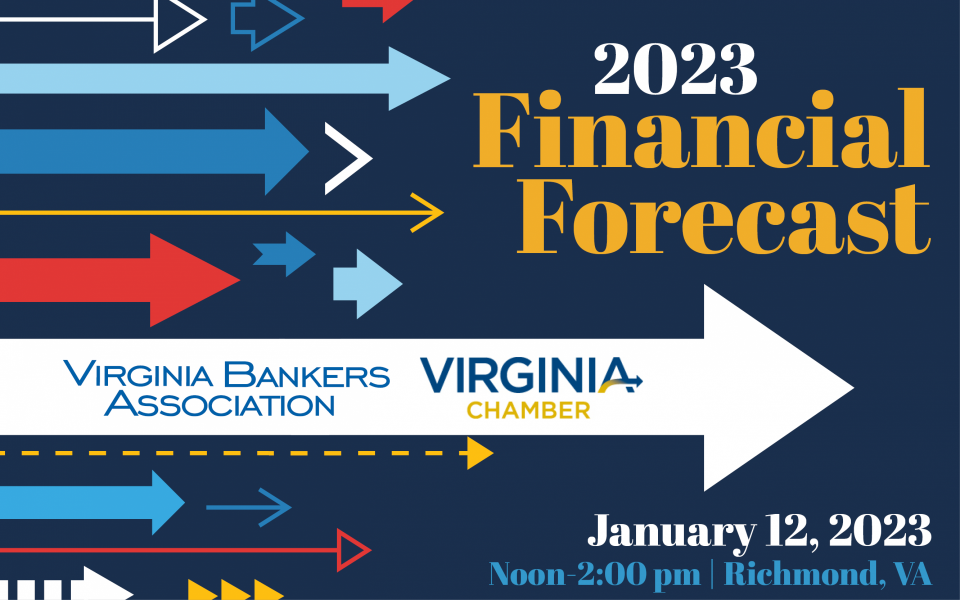 The Virginia Bankers Association and the Virginia Chamber of Commerce partner each year for the Financial Forecast, the premier event of its kind, attracting hundreds of members of the business community at the first of the year to learn what lies ahead for the state and national economy.

Thomas I. Barkin, President & CEO | Federal Reserve Bank of Richmond
Tom Barkin is the president and CEO of the Federal Reserve Bank of Richmond, where he is responsible for monetary policy, bank supervision, payment services and the Fed’s National IT organization. He has held this position since 2018. Tom serves as a voting member in 2021 on the Fed’s chief monetary policy body, the Federal Open Market Committee. He is “on the ground” continually in the Fed’s Fifth District, which covers South Carolina, North Carolina, Virginia, D.C., West Virginia and Maryland. His engagement in the region has brought real attention to areas facing economic challenges. Prior to joining the Richmond Fed, Tom was a senior partner and CFO at McKinsey & Company, a worldwide management consulting firm, where he also oversaw McKinsey’s offices in the southern United States. He served on the board of directors of the Atlanta Fed from 2009 to 2014 and was the board’s chairman from 2013 to 2014. Tom earned his bachelor’s, MBA and law degrees from Harvard University.

Robert Stolle, President & CEO | Virginia Innovation and Partnership Corp.
Bob Stolle is President and CEO of the Virginia Innovation Partnership Corporation (VIPC) in Virginia. Bob leads VIPC in its mission to create and execute strategies to accelerate innovation, imagination, and the next generation of technology and technology companies. He is responsible for overall strategic planning, financial management, and employee engagement for the organization. He is also directly accountable for outreach to and collaboration with the business and education communities and the Commonwealth of Virginia government. Previously Bob Stolle held the position of Senior Vice President of Policy and Regional Initiatives at VIPC. His responsibilities included coordinating programs and policy initiatives across four VIPC service lines that work to expand commercialization, capital formation, market development, and revenue generation services in Virginia. Representing VIPC, Bob serves on the GO Virginia Guideline Workgroup, he is on the executive committee of the University-Based Economic Developers (UBED), the GENEDGE Alliance, and is on the Boards of eight regional technology Councils in Virginia. He co-chaired “Technology, Innovation & Startups” for the Virginia Chamber’s “Blueprint Virginia” strategic plan. He serves on the Investment Advisory Board for the Launch Place Seed Fund in Danville. Bob served in several key positions for the Commonwealth of Virginia during the administration of Governor George Allen, including Secretary of Commerce and Trade, where he was responsible for 15 state agencies and promoting economic and community development in the Commonwealth. Since then, he has served on the technology transitions teams for Governors Warner, Kaine, McDonnell, McAuliffe, and Northam. He started and grew the Greater Richmond Technology Council (now RVA Tech) to 400 corporate members in the private sector. Bob was Executive Vice President and COO of Richmond-based Core Consulting and, previously, engineering director for the global leader in military and space simulation and training systems. Bob has an engineering degree from the US Naval Academy. He served on active duty and in the Reserves as a Navy pilot and retired with the rank of Commander.

Become a Sponsor for the 2023 Financial Forecast!

There are numerous opportunities for an organization to sponsor at the 2023 Financial Forecast!