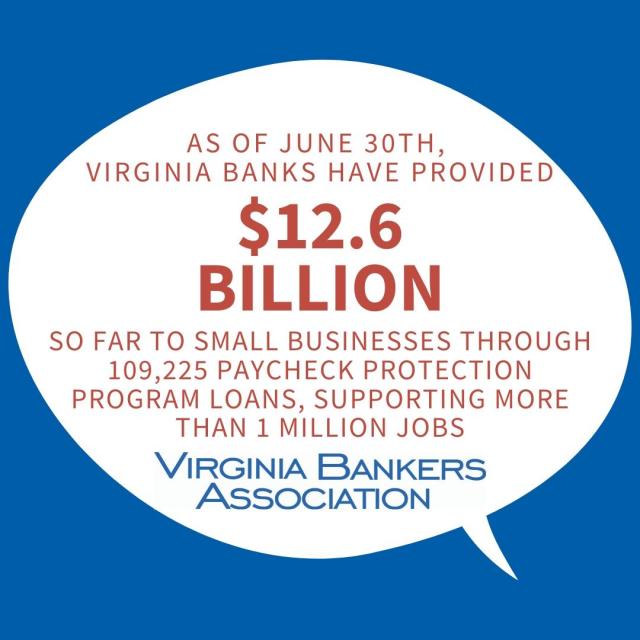 Virginia banks of all sizes have processed 109,225 Paycheck Protection Program (PPP) applications totaling $12,611,135,107 as of June 30, according to the Small Business Administration (SBA). Virginia banks, through the PPP, have supported more than one million jobs.

In response to calls from Congress for greater transparency, the SBA this week posted data on all PPP loans, except those that were canceled. The data include city, state, number of employees who benefitted, lender name and congressional district. Congress is expected to have access to the full data.

‌The data released demonstrates that nationwide, 4,885,388 loans have been made to small businesses by 5,461 lenders. The total value of these nearly 4.9 million loans is $521,483,817,756. Notably, the average loan size is $107,000, showing the program is broadly based and assisting the smallest of small businesses.

“Banks’ efforts have had a direct impact on the economy. Everyone from Federal Reserve Chairman Jay Powell to House Financial Services Committee Chairwoman Maxine Waters have acknowledged that banks have been part of the solution to the economic dislocation caused by the pandemic,” said Bruce Whitehurst, president and CEO of the Virginia Bankers Association. “Banks and their employees have helped—and will continue to help—the nation through these extraordinary times.”

The Paycheck Protection Program (PPP) has been a lifeline for millions of America’s small businesses and their employees. Last week, the Senate passed legislation extending the PPP from expiring on June 30 to August 8, 2020. The House followed suit, and the president signed it into law this past weekend. The extension gives borrowers and lenders an additional five weeks to spend down the approximately $130 billion in funds that remain. Banks will continue to offer PPP loans and to reach out to eligible small businesses that have yet to take part in the program.

In addition, a bipartisan bill was introduced last week—by Sens. Kevin Cramer (R-N.D.), Bob Menendez (D-N.J.), Thom Tillis (R-N.C.) and Kyrsten Sinema (D-Ariz.)—that would require all PPP loans of $150,000 or less to be automatically forgiven with just a one-page form and a self-certification by the borrower. The Virginia Bankers Association supports this auto-forgiveness bill and urges Congress to enact the measure. The threshold would apply to some 85% of loans, bringing tremendous relief to borrowers and lenders alike.

If you would like to schedule an interview with Virginia Bankers Association President & CEO Bruce Whitehurst on this issue or any other banking industry topics, please email him at bruce@vabankers.org.